You will write your answers on your own paper.  PLEASE put your name and a title on the assignment.  I cannot grade assignments if I don't know what they are.  Please put the titles of each sheet above your answers for that sheet. 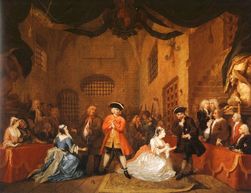 The Dashwood sisters, characters from Jane Austen’s novel Sense and Sensibility, lived rather elegantly in 1700s England. Is that what your 18th-century ancestors’ day-to-day lives were like?

There were two very different lifestyles in 18th-century England: that of the rich and that of the poor. With the Industrial Revolution, which started in the middle of the century, came new machinery that saved time and made some people very wealthy. The rich were getting richer and the poor, poorer.
Many people were out of work because suddenly machines were doing their jobs.  The population was growing wildly. Cities were dirty, noisy, and overcrowded. London had about 600,000 people around 1700 and almost a million residents in 1800.  The rich, only a tiny minority of the population, lived luxuriously in lavish, elegant mansions and country houses, which they furnished with comfortable, upholstered furniture.  Their calendars included dinner parties, opera, and the theater. Many had inherited their great fortunes and never knew what it was to have to work, cook meals, or empty their own chamber pots.  Fashion was important in upper society: Upper-class women wore stays, which were bodices with strips of whalebone, and hooped petticoats under their dresses.  Men wore knee-length “breeches” with stockings, waistcoats, and frock coats over linen shirts, as well as buckled shoes. Three-cornered hats were popular, too—and wigs.  Schools were not compulsory, but many upper-class boys attended school, and some girls from well-off families did, too. Girls were educated more in “accomplishments” like embroidery and music than in academic subjects.  Some “charity schools” started to provide an education to lower-class children.  Tea drinking became popular in the 1700s among both the rich and the poor.  Poor people ate rather plain and monotonous diets made up primarily of bread and potatoes; meat was an uncommon luxury.  Poor craftsmen and laborers lived in just two or three rooms, and the poorest families lived in just one room with very simple and plain furniture.  It was a difficult life for poor people: There was no government assistance for the unemployed, and many had trouble finding their next meal or a warm place to sleep.  For every 1,000 children born in early-18th-century London, almost 500 died before they were 2, generally due to malnutrition, bad water, dirty food, and poor hygiene.  Orphans roamed the streets; because they didn’t attend school, they had little chance of improving their situation.